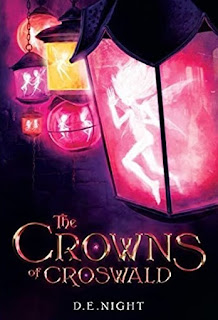 In Croswald, the only thing more powerful than dark magic is one secret...

For sixteen years Ivy Lovely has been hidden behind an enchanted boundary that separates the mundane from the magical. When Ivy crosses the border, her powers awaken. Curiosity leads her crashing through a series of adventures at the Halls of Ivy, a school where students learn to master their magical blood and the power of Croswald's mysterious gems. When Ivy's magic and her life is threatened by the Dark Queen, she scrambles to unearth her history and save Croswald before the truth is swept away forever.

Warning: This review may contain clichés and superlatives in my description of this book.

(Please note: no clichés or superlatives were harmed in the writing of this review)

When I started reading this book I had a hatful of superlatives that I intended to use, you know, things like Magical, Enthralling, Enchanting, Captivating etc.

However, I decided to throw them out of the window and tell you what I really think.

I loved this book! It made me remember why I fell in love with fantasy books. Why, as a kid I would want to read books that took me out of this world and plonk me into another world with strange beasts, magic and a hero that would defeat the evil King, Queen, Sorcerer (delete as appropriate).

If I could time travel back to my childhood, I would take this book back with me, and say ‘Here kid, read this!’

Now, I suppose you want me to tell you about pacing, character development and all that kind of stuff! Well, I don't know if I want to!

Well, I might just do that, but in a bit. What I wanted to tell you is that when I started this book, I started it with a reviewer's hat on, but after the Prologue, I decided to throw away all pretence of trying to review this book and decided to let myself get caught up in the story's joyful style and just read it, and enjoy it.

As the description tells you, the book is the story of Ivy. A maid in the Plum household, a household devoid of magic and is quite simply the most boring place in the world.

Ivy is a Scaldrony maid, in the kitchens of the Plum Acreage. Her job is to look after the Scaldrons,a type of dragon that doubles up as an oven. The kitchen is run by the tyrannical Helga Hoff and after a series of mishaps involving the aforementioned Helga Hoff, Ivy, finds herself, quite unexpectedly, out on her ear into the wider world.

However, things are not as they seem when her friend, Rimbrick, the bright spot in her previous life of drudgery, leaves her a small fortune, some books and a mysterious letter, telling her of a debt that he owes to her family.

She is shortly collected by the mysterious Lionel Lugg, longtime scrivenist and freelancer. The scrivenist informs her that she is to attend The Halls of Ivy, where Royals and Scriveners alike receive an education in the arts of magic.

What follows is a classic fish out of water story of a girl who is thrust into a world she does not understand. We follow Ivy as she tries to fit into this unfamiliar world, sharing with her the isolation that she feels and the sense of excitement and wonderment that she experiences when she is plunged into this new world that she does not quite understand.

As Ivy becomes more proficient in her learning, her powers start to blossom and soon Ivy finds that her world is full of secrets, adventures and mysterious strangers.

Now, full disclosure. I am not the intended demographic for this story, exceeding that age by at least three or four times. But does that matter? No, not one bit. I was able to enjoy and relish the story as much as I would have done when I was a much younger reader and admire the quality of the prose (although younger me would have no idea what that word meant).

Night's world is rich, filled with characters that will delight (Ha ha, I told you to expect that didn't I?) and keep the reader enthralled (there's another one!). Ivy’s character develops as she learns more about magic and the Halls of Ivy. Throughout the world, there is a vast array of beasts that will keep any young fantasy fan happy. She also has an interesting magic system that works well. However, this magic system is not too impenetrable for younger readers and is pretty easy to follow. As for the world, she is constantly introducing new aspects that enrich both the environment around our main protagonist and also the story.

The other thing that we have here is a strong female lead and a collection of equally strong female characters. The main positions of power centre around women and the fact that they have got there by being exceedingly brilliant in every way. And whilst the story centres around female characters, Night successfully brings in a nice element of scrunginess to the female characters that makes them seem like real girls, instead of the popularised image of little girls wanting to be princesses and queens (although there are plenty of princesses and queens in the story).

For me, the story centres around the magic of books and words. The scrivenists embrace the use of words in order to create their magic, but ultimately, the power is held by books and stories.

In all, Night brings in the right amount of danger, comedy and world building to keep the story moving along at a pretty good pace. The sense of threat is there to keep the reader involved and wanting to know more before they put it down for the night.

So, if you have a budding little fantasy book nerd at home, and you want to keep them happy, give them a copy of this book and hopefully, all will be well.

Right, I was asked by the publisher, Stories Untold & Netgalley to have a look at this book and review it. I did & all the enjoyment is my own. So there!