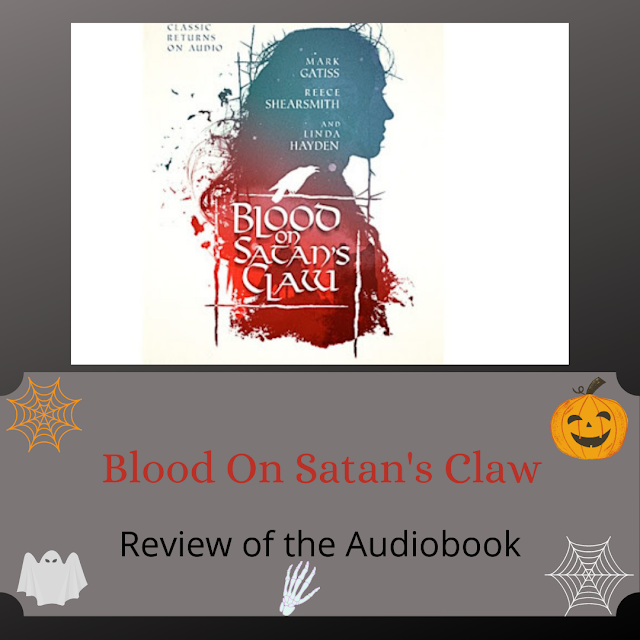 Happy Halloween folks. Today I am posting a short review of the audiobook 'Blood on Satan's Claw' which is available on Audible.
First, some information about the book

This Audiobook has won numerous awards including -

Seventeenth-century England, and a plough uncovers a grisly skull in the furrows of a farmer's field. The skull disappears, but its malevolent influence begins to have a strange influence upon the nearby village of Hexbridge. First, strange ocurrences with the animals in the village, fruit goes rotten and the children of the village begin to act in strange, unsettling ways.

Meanwhile, strange things are lurking in the woods, evil starts to rise and take form on earth, corrupting the children. As hysteria spreads can Squire Middleton (superbly played by Mark Gatiss) and the Reverend Falloowfield stop the Devil taking human form and spreading his evil, here on earth.

As a child, I grew up on a diet of Doctor Who, fantasy and horror films. I know! I was a bit of a strange kid! Amongst many of the of the Hammer films I watched, I would devour anything, and this 1971 film from Tigon Pictures was one of those that stuck with me and still remains one of my favorites of British horror films from the 1970's.

If you have ever seen The League of Gentlemen, it is hard not to notice that blended with the dark comedy, there is a distinct element of horror, and both Mark Gatiss and Reece Shearssmith cite this film as one of their favorite films. So it is not surprising that this audiodrama is one that is presented with a love of the source material, and it shines through.

The best thing that this can be compared to in recent times is The VVitch. For those that like that film, you will surely get along with this, as it has that same unsettingly hypnotic tone.

As you can imagine, with a solid British cast, the drama is excellent. It immediately puts you in the action and you can get a good sense of the brooding evil that is encroaching on the characters. Mark Gatiss is excellent as Squire Middleton, who refuses to belive that anything supernatural is taking place until he realises through a series of events, that dark forces may be at work. Reece Shearsmith plays quite a subdued part as the unassuming Reverend Fallowfield. Additionally, Rebecca Ryan (Shameless, Casualty) is excellent as the manipulative Angel Blake. Add to that a supporting cast like Alice Lowe (Sightseers, Prevenge), Ralph Ineson (The Witch) and Thomas Turgoose (This is England), you have the makings of a solid and utterly unsettling piece of horror.

One of the things that immerses you in the drama is the sound production by Edwin Sykes, who creates oodles of atmosphere manageing to convey the creeping and oppressive atmosphere of the story.

The pacing is second to none. At the begining, it's steady as seemingly unassuming events occur in the village. However, it intensifies steadily as the story unfolds until it reaches its climatic end.

I have got to say, that I enjoyed this audio drama immensley, and I think it is defintely one of my favorites of Audible's original dramas. It's also good to see that they used some of the original cast from the film. The book is quite short, under two and a half hours, so that means that you can easily listen to it in a short space of time