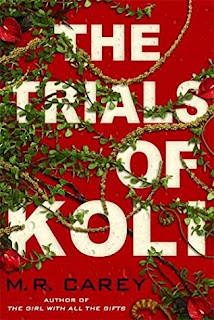 The Trials of Koli (The Ramparts Trilogy #2)

By Mike Carey
Why everyone isn’t reading Mike Carey’s ‘The Rampart Trilogy’ I don’t know. I simply cannot wait until the next instalment of this story hits my reading lists, it is simply brilliant and everyone should read it.
The Trials of Koli is the second book in ‘The Ramparts Trilogy’ and follows our hero Koli and the rest of the crew as they travel in search of the ‘Sword of Albion’. Their quest takes them through the savage land of England and what it has become following catastrophic environmental disaster and the subsequent devastating wars that have led the world to become a place that is full of cannibalistic tribes, ecological predators and a dark force that is exerting its will to take over the known world.

This second instalment moves the story of Koli, Ursula, Monono and Cup through a wider world as they travel through the devastated lands of England (or Ingland as it it referred to in the story) closer to ‘The Sword of Albion’ that is coming from the mythical city of London.

Whilst Mike Carey’s story is set in a dystopian future of England, its feet are firmly planted in epic fantasy and has all the tropes of that genre that has hooked a diehard fantasy reader like me. For instance, it has the mythical quest for ‘The Sword of Albion’ which is not entirely what you might expect, it has the party that comprises of a wizard (Ursala), the Fighter (Cup) and the quester (Koli) all with an end goal to save the world.

In the first book, the main protagonist is Koli,  with the story being narrated from his perspective and focussing on how he came to be ‘shunned’  and subsequently thrown out of his warm blanket of a life in the village of Mythen Rood and his survival following his expulsion. However, this book introduces another point of view and we spend time with Koli’s former love, Spinner. The points of view move between these two points of view and simultaneously expands Koli’s Story whilst showing what happens in the village of Mythen Rood following Koli’s expulsion through Spinner’s eyes, and also develops a separate character and another storyline. So effectively setting up two separate stories that share an equal billing.

Now one of the things that I find particularly brilliant is the language that Carey uses. However, I know that some people might find it a bit problematic because the narration is written in a mix of pigeon english and broad yorkshire colloquialisms that some people may find it difficult to get along with, for instance Koli will often say that he has ‘et’ his food, which transcribes as he ate his food. And in another, when Spinner describes her meeting with ‘Rampart Remember’ who is a member of the ruling elite in Mythen Rood who is tasked with getting information from an ancient piece of technology from the world before the one that exists now, she describes hat she ‘done him a courtesy’ meaning she gave him a curtsy. However, I strongly urge you to keep going with it and you soon lose your preconception that this may be difficult to read and thoroughly get swept away in the story .

All in all, this is a fantastic story that left me wanting more and cannot wait until the conclusion comes in 2021.

Oh, and I want to mention that I got and ARC from Netgalley.co.uk and the publishers Little Brown Hat and gratefully thank them for letting me read this wonderful story!