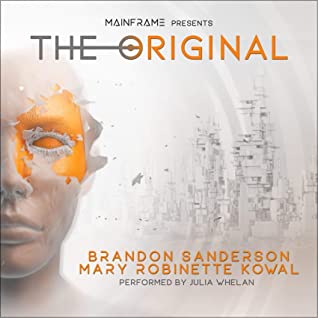 Audiobook, 3 hours and 24 minutes, 183 pages
Published September 14th 2020 by Recorded Books
Hugo Award-winning authors Brandon Sanderson and Mary Robinette Kowal team up in this exclusive audio-first production of The Original, a sci-fi thriller set in a world where one woman fights to know her true identity and survive the forces that threaten her very existence.
In the near future, humans choose life - for a price.
When Holly wakes up in the hospital she is confused and disorientated. Her memory is compromised and she does not know the events surrounding her admission into the medical facility that she now finds herself. She awakes to find medical staff and agents of the government at her bedside. She soon finds that she has talents that she did not possess before she woke up in the hospital including the ability to kill......
As she becomes less confused and disorientated, she discovers the horrifying truth that she is in fact a copy of an original person. But it does not end there, not only is she a copy, but she has four days to track down the murderer of the man she loved, her original.
As she searches for the answers to the murder, Holly will uncover secrets and lies. She will also find that the world she once lived in has become dangerous as she battles terrorists that want to bring down the government and kill her. But in the end, she will find the truth, about herself and the death of her husband.
The Original is a noir - ish thriller set in a future where the world is individualised to a person's ideal theme. The story moves at a break - necked speed and is action packed from beginning to end.
Sanderson has already proven that he can genre hop at an instant and write stories that are as engaging and gripping as his fantasy novels. However, what took me by surprise is Kowal's writing. Goodness me, if this is the kind of stuff that she produces, then I am in and looking to get a hold of as much stuff as I can.
However, not only should praise go to Sanderson & Kowal, but Julia Whelan's performance throughout this audiobook. She delivers each line masterfully evoking each character that is introduced and aiding the listener to visualise every scene. Additionally, the sound design of Daniel Eaton and Paul Fonarev (not sure I am spelling this right) is skillfully done, sending the listener into the same confusion and disorientation that Holly feels at beginning and then the strangeness of the world in which Holly inhabits, making the production a completely rounded drama rather than it being just a being book that is been read to you and completely drawing the listener into an alien world.
Now to say this is a novella, the world is fully rounded, and Sanderson & Whelan build history and describe the environment with such clarity that the listener is never lost.
What is also interesting is the variety of influences that make up the story, obviously there the nods to the noir cinema of the 1940's such as DOA, science fiction classics such as Bladerunner (but in this story, it is a reversal of roles with the replica chasing the human) and E.M. Forsters The Machine Stops, with each individual living in its own little bubble, but they also manage to squeeze in the action genre as well. The writers shape these components like artificers into something new and exciting
In terms of pacing, as I said earlier, the story moves along at a break neck pace, never once stopping or losing its way. There are action sequences galore that are well written and fit perfectly into the plot.
Each Character is believable and so real that they were there with me as I listened to the story unfurl. Each one fitting perfectly into their place and enhancing the experience.
The one thing that I can never work out though is the writing partnership and how it works. Whose writing is whose. If this were a musical collaboration, it would be easy to tell who was riffing off who, but in this partnership, these two are playing in partnership, complementing each other to give the perfect harmony.
Labels: Book Review