The End of the World as we know it! 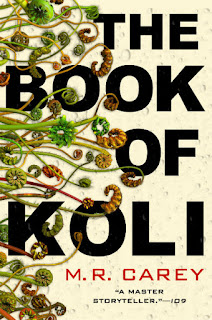 The Book of Koli

As far as dystopian tales go, everybody from Mary Shelley to Ben Elton has added to the annals of the genre. So how do you conjure new stories and perspectives in this apocalyptic soup.

Well for one, you have to be Mike Carey. That could do it. With his book, The Girl With All The Gifts he managed to make a distinctive and thought provoking addition to the zombie apocalypse. With his new book 'The Book of Koli' he adds a coming of age story set in the remnants of the Yorkshire countryside.

Koli is a young boy who lives in the fortified town of Mythen Rood. A village that is thriving despite the fact that everything and everyone is trying to kill you, or eat you or kill you and then eat you. As you can guess this is a savage world and every day is a test of survival. However, Koli is a young man who has aspirations of becoming a rampart. A member of the ruling elite who protect the village. Also, get the girl and live happily ever after. The End.

However, things do not go as planned, which is lucky for us  or it would be a pretty dull book. Now one of the first things that you will see mentioned is the language of the narrator. It is quite dense, but it wasn't to me as the language revolves around a crude broad Yorkshire accent, which is the way that I talk, so it was quite a surprise to see a book written with this type of prose.

Initially, the story revolves around the village and its trials and tribulations and things go well, there are loves and losses. However the story moves its settings when events occur that change koli's life forever.

The story revolves around the main narrator Koli, who you can easily imagine being sat around a campfire telling the story to his enraptured audience. And the reader is his audience. Ursala, the technological Gandalf of the story becomes a main character that you hope will be expanded upon. The other main character of the party is Monono Aware (SE) whose character develops (literally) throughout.

With little snippets of information, you learn that the world that Koli and its other inhabitants live are the descendants of the remains of the human world that has been devastated by some kind of cataclysm. We are not sure when or how, but we know that nature has been turned into a voraciously savage beast and the main purpose of the ecosystem is to eat whatever it can. Even the trees have turned into carnivores and the threat of the world outside Mythen Rood looms in the background. However, nature is not the only threat.

At first, I did find the story a little sluggish, but I think that this reflects the setting. Whilst dangers threaten the life of the village, the little hamlet is as picturesque a village that could be anywhere in the English countryside with it's funny, quaint little customs. But this changes as events occur and the narrative speeds up to reflect of situation. This gear change sneaks up on you from behind and you don't realise it is there until you suddenly realise you have finished the book.

By the way, I read an advanced reading copy from the publishers - Many thanks!