The Bones are the key 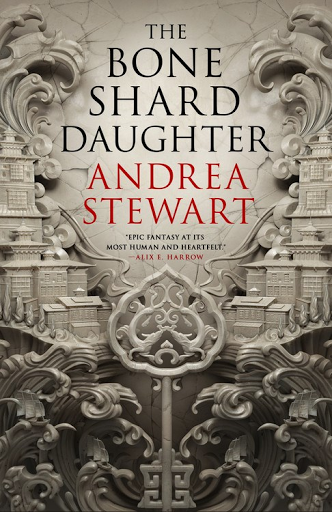 Andrea Stewart weaves a complex tale that keeps you guessing and turning the pages to uncover the secrets at the heart of the book just like the character, Lin, who is searching for the answers of the bone shard magic that her father wields and guards jealously.

The story centres around Lin, the daughter of the tyrant Emperor Shiyen who rules his house and his kingdom with cruelty and mistrust.

They live in the crumbling and oppressive castle that is as much a representation of the empire that they rule as it is the relationship that the Emperor has with his children.

The book has a distinct gothic feel to it when it tells the tale of Lin's life with her father, her brother  and the soulless servants that surround her. Her father is cruel and just as soulless as the servants, continuously fostering competition between Lin and her brother as they claw their way to be their way into their father's affections.

In as much as Lin and Bayan (Lin's foster brother) are the characters, Stewart also makes the environment that they are in as much a character as the people that reside in the castle. There is a palpable air of cloying oppressiveness that reminds me of Shirley Jackson's work.

However, the story regularly shifts points of view to other characters and the wider world outside of the castle in order to show the effects of the Emperor's rule and provide some world building and backdrop to the other protagonists of the story.

Jin is a smuggler who is obsessed with searching for the answers as to how his wife disappeared eight years ago. He is a man that has made bad choice after bad choice, getting himself embroiled with the shadowy underworld of the Ioph Carn, a crime organisation that rules with the same amount of fear as the Emperor on his search for his wife.

We meet Jin as he is following a lead for his missing wife when a disaster strikes one of the islands of this world. Prior to the disaster, he agrees to smuggle a child to another island in order to save him from the horrific trials of the Tithing Festival, a terrifying ritual in which bones are chiselled from the heads of the islands children so that the Emperor can use their power to bring life to his twisted creations that populate the islands, carrying out the orders that the Emperor commands.As disaster strikes he saves the life of the  young boy and also rescues a strange cat like creature who is as much as a child as the one that he is carrying. The  creature becomes part of his life and the boy that he saves names the creature Mephisolou which gets shortened to Mephi. However, things do not go as planned and the creature the he selfishly saves from death, so that he can stop the child he has saved from crying forms a strong bond with Jin. As the relationship grows between Jin and the strange creature, Mephi changes him in ways that he doesn't realise.

There are other characters in the book, Pahlue, the governor's daughter of one of the other islands of this strange world, and Sand. A mysterious occupant of another island whose importance at first is hidden, but becomes much more of a character as the book progresses.

I enjoyed this book immensely, devouring the story of Lin, Jin and Mephi and definitely cannot wait until the next installment of this story. Stewart has crafted a world full of mystery and intrigue that promises to get better and better.

The Bone Shard Daughter is published 8th September 2020 by Orbit