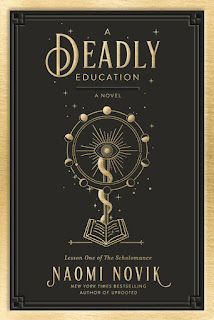 Do you want to be a mighty wizard?

Do you want to join a group of like minded sociopathic individuals to get on and join the elite of the wizarding world? Then:

Welcome to A Deadly Education!

(Or how to win friends and influence people, so that the nasty things don't eat you)

Right, let's get the obvious out of the way. This is a magic school for witches and wizards and this is not the sole property of he who shall not be named. Okay? Phew, glad we got that sorted.

What we have here is a tale of friendship against adversity. The old romantic mismatch. A kind of Harry met Sally situation in which the good guy is annoyingly good and the damsel  is constantly  distressed at being regularly rescued by the good guy, even though she is some mega evil witch that has a prophecy attached to her (whoa, stop it! We got those comparisons out of the way in the first sentence. Didn't you know that in quite a lot fantasy stories, there's a chosen one with a prophecy attached? Well, don't you? Jeez anyone would think that this is a HP reference. Well it's not! Okay?).

Glad we got that out of the way!

The story revolves around Galadriel (or El for short) who is a pupil at the Scholomance, a school for witches and wizards whose first lesson that they have to learn, is to get safely through breakfast before they become breakfast. The Scholomance is a magic school that is populated by magical teens that have been whisked away from their parents and have to board in a school that has a vast array of different ways to kill you in some horrible way. From flesh eating maggots in the porridge to demonic corridors that will strip the skin from your bones, there is an endless way to get yourself killed. Add to that psychopathic students who will happily kill you for no apparent reason, this makes my days at school seem positively balmy in comparison.

On top of that, you have to have political skills that are reminiscent of a medieval court. Where you have to form alliances or trade something of worth in order to fix your door, brush your teeth or even get a shower.

This school is flippin dangerous!

Surprisingly, El does not have many friends. However, this changes when the handsomely, charming popular kid, Orion Lake, starts to take an interest in her and forces his friendship on her, whether she likes it or not. However, as the story progresses we see that even though they are at the opposite ends of the popularity spectrum, they both share similar experiences and are both equally isolated.

In a Deadly Education, Novak's wizarding school is not all jolly hockey sticks and  full of quaint little traditions that hark back to a corner of England that is stuck in the innocence of yesteryears. It's filled with scary monsters and super creeps. It is the dog eat dog world of a capitalist society where the more power and influence you have, the more likely it is that you will survive. It juxtaposes the world outside, which again is not filled with a  lovely, cutesy world that resides in the past. In Novak's world, being a wizard is a dangerous lifestyle which attracts the monsters that live under your bed so that they can kill you and eat you.

Once you get past the myriad ways in which you can die, be eaten or be killed and then eaten, you get to the heart of the story. Which is, survive. Simple as that. Everything is geared towards surviving the experience of school and hopefully get out of there. That is if you can get past a cornucopia of nightmarish beasts at the graduation ceremony that are hell bent on doing all the things mentioned earlier.

Why anyone would want to be a wizard in A Deadly Education is beyond me. I would use the same tactics that the mundanes (the non - magical community) use. Don't believe in magic. Simple as that! The mundanes do not believe in it and that saves them from  the monsters. Otherwise, it looks like you are in for a life of looking over your shoulder and elevating yourself to the rank of paranoid sociopath.

On the whole, I enjoyed A Deadly Education and the story of the snarky main character and how she manages to get through everyday and how her world expands from a world of one  to her development of 'friends'. This is a  fantastic setup for the rest of the series, it sets up the world, the characters and is just the start of the story.  Will I be reading the next one? Hmm, I think I will! I wouldn't mind seeing what happens next to El and the gang.

Thanks to Netgalley and the publisher for the ARC.